I haven’t written about photographer Chris Jordan here yet, but I do talk about him in my Nature and Popular Culture class when we discuss consumption. Well, I mostly just show some of his amazing photographs that document the scale of our impacts on the planet. His “Running the Numbers” series, for example, beautifully and playfully documents the scale and impacts of our consumption, deploying everyday objects in super-sized and super-detailed images.

Along with Edward Burtynksy, Jordan is creating the most compelling photographic work I have seen that illustrates the scale and extent of the harm that the consumer lifestyle does to the planet and to ourselves. I really have no patience anymore for the ecoporn of unrealistically pristine landscapes that so many Nature photographers offer up. Yeah, sometimes we should celebrate those Sierra Club moments, but a steady diet of pretty pictures does not fairly represent what we are doing to the planet and our fellow creatures.

So, what prompted me to write this post were Jordan’s latest photos from a trip he recently made to the Midway Atoll National Wildlife Refuge. There, he and several other artists explored the islands and documented the epidemic of dead albatross chicks, starved by bellies full of plastic flotsam instead of seafood.

One of Chris Jordan's Pictures of Dead Albatros chicks, killed by a diet of plastic

Jordan writes the following on his web page for this Midway series:

These photographs of albatross chicks were made just a few weeks ago on Midway Atoll, a tiny stretch of sand and coral near the middle of the North Pacific. The nesting babies are fed bellies-full of plastic by their parents, who soar out over the vast polluted ocean collecting what looks to them like food to bring back to their young. On this diet of human trash, every year tens of thousands of albatross chicks die on Midway from starvation, toxicity, and choking.

To document this phenomenon as faithfully as possible, not a single piece of plastic in any of these photographs was moved, placed, manipulated, arranged, or altered in any way. These images depict the actual stomach contents of baby birds in one of the world’s most remote marine sanctuaries, more than 2000 miles from the nearest continent. 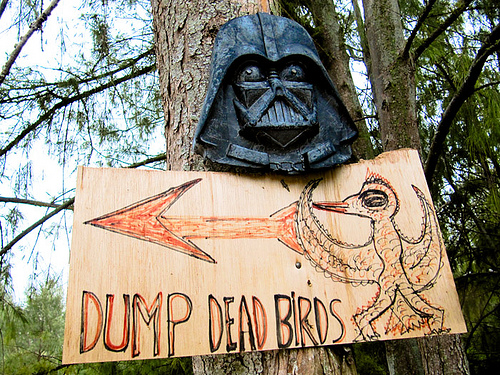 Jordan and his colleagues have a blog, plus a significant Flickr archive, documenting the trip / project. They’re also working on a book and a film about the issue and the process.

The 2008 film Message in the Waves also documents this issue, along with others facing the pacific islands. Here’s an excerpt that outlines the extreme non-diet of these birds in an equally disturbing way.

What is so compelling about the way this issue is being approached in Jordan’s photographs and in Message in the Waves (and undoubtedly by others as well) is the moral subtext implied by these images. Without being sentimental, these representations evoke an empathy for the birds that is visceral. This is not some future possibility; it’s what we’re doing right now to these innocents. And it’s enough to make a feeling person cry.

It’s also notable that these images evince a biocentric / ecocentric advocacy position. These are not about the harm we do to ourselves with our garbage; it’s what we’re doing to the birds. And those birds are not represented as resources, they are simply the unsuspecting victims of our intolerable consumerism.

Executive Director of the International Environmental Communication Association (IECA). I also research, teach, write about, and speak on environmental and sustainability communication, media, culture, and policy. Facts are usually facts, but opinions and sense of humour are always my own.
View all posts by Mark Meisner →
This entry was posted in Art, Environmental Communication, Media and tagged animals, film, photography, pollution, visual, waste. Bookmark the permalink.
%d bloggers like this: