Steven Chu on The Daily Show

Steven Chu, the U.S. Secretary of Energy, was on The Daily Show Tuesday night (sorry, I can’t seem to get the video to embed properly). Chu came across as funny and likable, and he held his own with Jon Stewart. As Stewart remarked, he seemed “alive,” apparently unlike other members of the Cabinet. (Irrelevant aside: I noticed that he is the only member of the Cabinet whose official photo has the member seated). So, on the surface, this was a successful appearance for Chu. 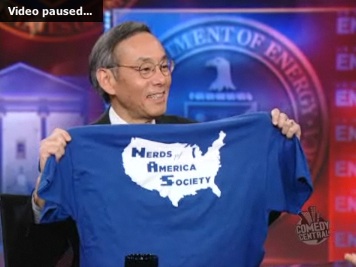 Steven Chu has a geeky sense of humour

In terms of his rhetoric, Chu twice managed to get his talking points out (albeit somewhat weakly) about how the U.S. has the chance to lead the “new industrial revolution.” And that positive economic opportunity frame is certainly preferable to the apocalyptic climate rhetoric of old. That said, Chu didn’t offer any imaginative images or metaphors to the frame. Funnily enough, Stewart’s preceding piece, where he repeatedly falls asleep trying to explain cap-and-trade, is totally on the money. This plan is not only not clear to the public, it’s also narratively uninspiring and sleep-inducing.

And Chu seemed at a bit of a loss for words when Stewart brought up the climate crisis disinformation mongers and their dubious claims. Chu did not seem to have a talking point ready to make about the opposition. Why not? Did his staff put more effort into concocting that t-shirt than they put into preparing the Secretary for this key appearance? Thankfully, Stewart had some skewers of his own to point out the silly claims of the deniers.

Just to be clear, I’m really glad that this intelligent man is the Secretary of Energy. But is it asking too much for the members of the administration to have a few powerful replies ready for their critics? This just seems to be a missing piece right now, and again it is looking as if the dems are losing the battle for the hearts and minds of the public on this issue.

Note: Kevin Granada of the DeSmogBlog has another perspective on the Chu interview here. What’s yours?

Executive Director of the International Environmental Communication Association (IECA). I also research, teach, write about, and speak on environmental and sustainability communication, media, culture, and policy. Facts are usually facts, but opinions and sense of humour are always my own.
View all posts by Mark Meisner →
This entry was posted in Environmental Communication, Popular Culture, Rhetoric and tagged climate crisis, energy, humor, policy, television. Bookmark the permalink.
%d bloggers like this: